Getting to know: Teddy!

As the newest member of the Lady Dinah's cat clan, Teddy is thriving in the busy cafe atmosphere and has become a treasured member of the family since his arrival in February 2019. He initially captured our hearts with his big, golden eyes and chocolatey fur, and of course his glorious floofiness is a wonder to behold. 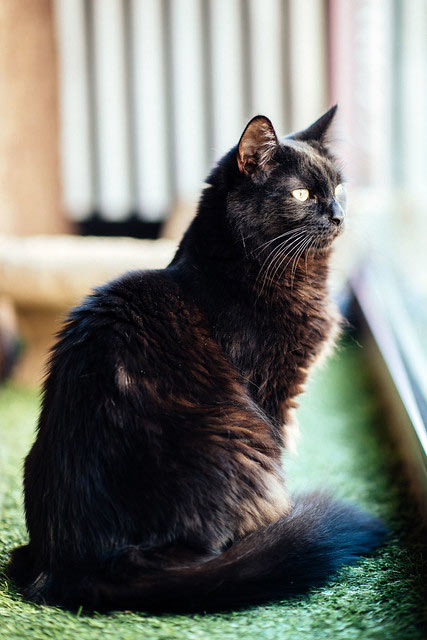 Although his beauty is still striking as ever, it's his cheeky personality that he's now mostly renowned for!

If you've had the pleasure of meeting him you may have noticed his fondness for forbidden snacks - although eating human food is a big no-no for our cats, we're constantly having to steer him away from the clotted cream! He's definitely got a mischievous streak but all in all he's a hilarious little guy with a great character.

You might have noticed that Teddy's name is a little different than most of the other cats in the cafe. Friends of Lady Dinah’s will know that we usually name our adopted newcomers after characters from classic literature. We didn’t name Teddy because similarly to Rodney, Del Boy and Cassandra, we are fostering him from someone else.

Teddy’s original owner recently experienced some health problems, which meant she needed someone to look after Teddy for an indefinite period of time while she recovers. Since he's doing so well in the cafe we're more than happy to love him as part of the family for as long as he's here!

When Teddy first arrived at the cafe he was initially kept in the isolation room, as we do with all our new cats. If we were to put a new cat right in the thick of it with no acclimatisation it would be chaos! He gradually got to know the Lady Dinah's staff, one by one, and was super cuddly with everyone. He sat on the Cat Carers' laps while they were writing their notes, played with any toys that were brought out and was always keen to see anyone who visited him. This was a great sign: cafe cats need to have a highly sociable nature for them to enjoy meeting many new people each day. 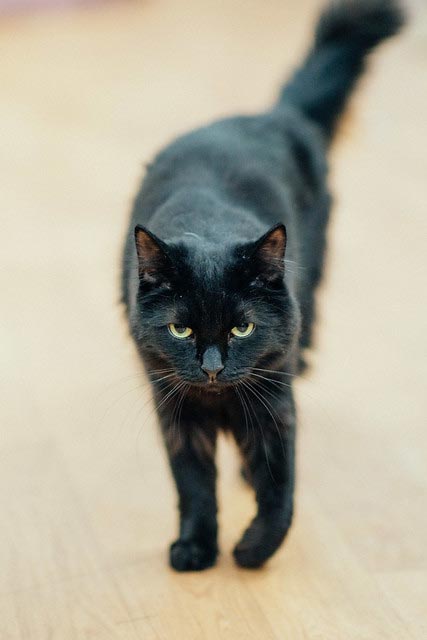 Teddy actually stayed in isolation for a little longer than we would usually keep newcomers. This was for a few reasons: with Donnie and Wookie still in the process of being rehomed and the arrival of Del Boy and Rodney, the balance of cafe cats had tipped towards the males. We noticed a couple of signs of competition amongst the boys during this time so decided it was best to complete the rehoming processes before we brought another male cat into the mix.

Also, Teddy loved being in the isolation room! In contrast to Obie, who couldn't wait to get out into a more open space, he seemed content to just lounge in there all day, getting cuddles from staff members and chilling by himself. We were glad he was comfortable, but the isolation room isn't made for long-term stays; indoor cats need a much larger space to thrive and the specialised amenities we have in the cafe are important in stimulating the cats' health and growth.

We think his reluctance to leave the iso room was also because of his age: although he's only two years old, he's the oldest cat that has been integrated into the Lady Dinah's family to date. Younger cats and kittens are much more curious and open to unfamiliar experiences, so with Teddy we had to take more time and care in introducing him to the other cats and the cafe environment. It took some time and the road was a bit rocky, as Teddy and the other cats seemed a little reluctant to get along. In fact, the other cats were being so protective of their territory, and Teddy was so erratic with his behaviour towards them, that the Cat Care team were seriously thinking that he would be better off being fostered elsewhere. However, as soon as these talks had started, the cafe's harmony was restored as if by magic. It was an unbelievably sudden improvement, but certainly a welcome one!

Now that Teddy has been with us for a number of months we've really gotten to know him well. He's kept some of his old tendencies - sometimes he still loves to bother the other cats, but now we've realised that he's not trying to torment them, he just wants to play! Understanding this was integral to keeping the peace in the cafe, as most of our cats are quite chilled out and don't react well when Teddy directs his spurts of enthusiasm at them. We know now to distract him with toys, or even to direct him towards Obie, who is currently the only cat who can match his energy. Those two guys love play fighting with each other and are frequently seen rolling around on the floor together having a blast! 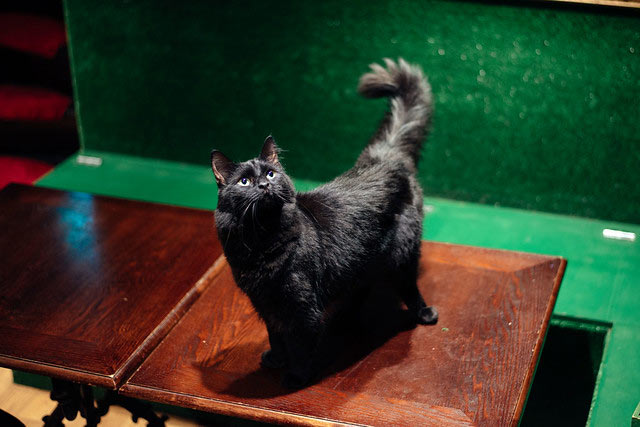 Teddy's other passions have also become evident to us over the past few months. As mentioned earlier, he loves to try and steal human food even though he knows he's not allowed. He seems to know exactly when the staff members have their backs turned - we've never met a cat quite so sneaky! Honestly, he loves all kinds of food and he knows exactly when the cats' own meals are being prepared. If a Cat Carer is even slightly late with the cat food he sits at the cat room door and unleashes his unique, low-pitched meow like a moany alarm clock ringing. We've also noticed his favourite locations in the cafe: if he's not sneaking around looking for crumbs, he's probably up on a high shelf in the tearoom, napping or surveying the area. When he's up and about he really loves to sit in litter trays, and will often just spend a good ten minutes chilling in one without even using it. It's okay Teddy, we don't judge. 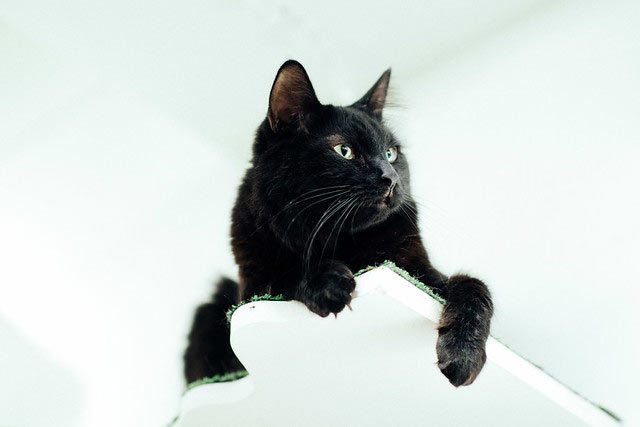 As well as Teddy's likes we've also become well accustomed to his dislikes. Most people are safe from witnessing these because it's the after hours Cat Care duties that he doesn't enjoy. Every night Teddy needs his teeth brushed and he isn't the biggest fan of it; he squirms around so much that he gets bright white toothpaste all over his lovely dark fur! Because of his tendencies to eat human food he also needs to be fed a probiotic to settle his stomach - this often means he has a face covered in white and brown pastes, which transforms him from elegant floof to hilarious clown boy in moments. Sorry, Ted!

We're all incredibly glad to have Teddy as part of the Emporium. Although his antics keep us on our toes, he's such a happy chap and we're loving watching him thrive as the months go by. Every day's a new adventure when Teddy's around and we're poised to see what other shenanigans he has in store for us! 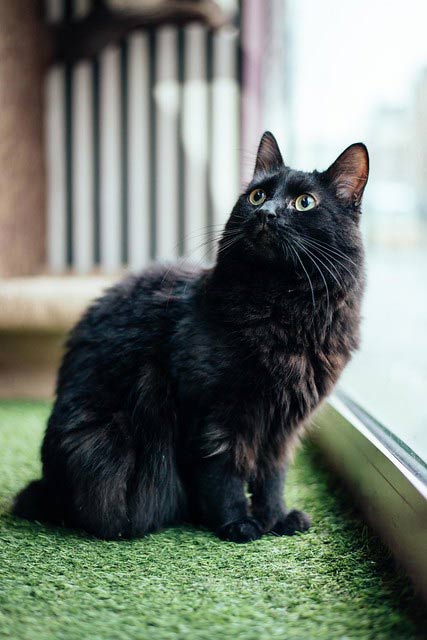 Share on
This entry was posted by Lady Dinah in News
Previous Reading The Big Flea Project at Lady...
Next Reading Getting to know: Oberon!
Filter
All topics
Recent posts
0